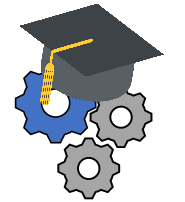 With the increasing number of engineering jobs, politics have more recently turned towards introduction of engineering subjects in early stages of curricula. More and more countries have started to introduce programming (and even robotics) to young children. However, this constitutes a real challenge for the teaching professionals, who are not trained for that, and are often skeptical to use new technologies in classrooms. Hence, the challenge is to introduce robots as tools to be used not only in programming or robotics based courses, but in the whole curricula in order to make them attractive to teachers as a pedagogical tool. ”Educational robotics” does not really constitute a research community per say. On one hand, there are scholars working on ”how to teach robotics” using robotics platforms such as Thymio and Mindstorms. Some scholars perform research in this domain (for example, measuring which learning activities produce faster learning), but their numbers are scarce, they typically meet in half-day workshops before ed’tech conferences (CSCL, AI&Ed, ….). On the other hand, one finds scholars who mainly do research on HRI and consider education as an interesting place for testing child-robot interactions. I launched in 2016 a series of workshops to build a Robots for Learning (R4L) research community. The first event was a workshop, along with the RoMan 2016 conference. The event gathered 30 participants from all around the world. The second event was a workshop along the HRI 2017 conference in Vienna, Austria, with 60 participants and 10 presentations. This fall, we hosted the first stand alone event, in Switzerland, for which we invited main actors of research in HRI for Learning. A new workshop is planned for HRI 2018. These workshops aim to mix scientists from field of robotics with those from digital education and learning technologies (See https://robot4learning.github.io/ ).

The near future of children's robotics

Workshop on Robots for Learning: R4L