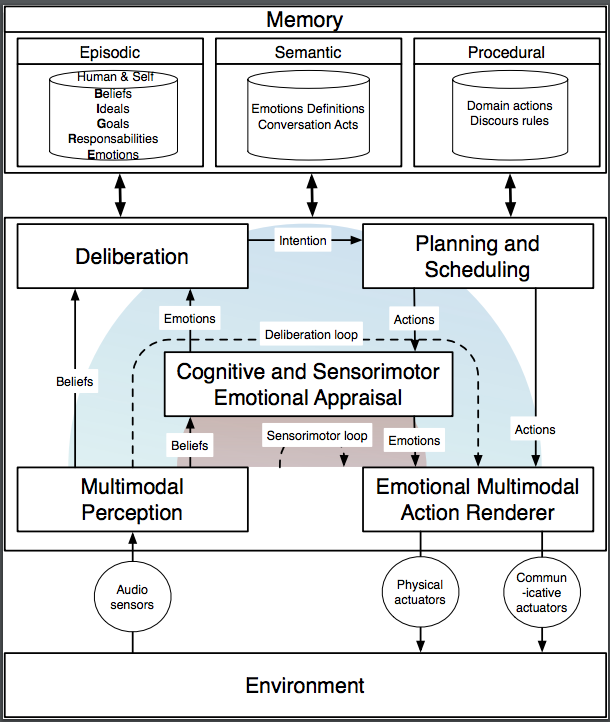 One of my interests is to make robots able to autonomously sustain interactions with users, and in order to do so, they have to be able to reason about the users’ and their environment. During my PhD, I have been working on a Cognitive Architecture able to reason on Emotion, named CAIO (Cognitive and Affective Interaction-Oriented) Architecture [3, 4]. This architecture, based on symbolic reasoning, showed promising results in modeling cognitive processes and specifically allowing decision making based on emotions. As shown in the figure, this architecture works as a two loops process, similar to the Dual-Process Theory - a deliberative loop generating intentions and a sensorimotor loop handling reflexes.

More recently, we have been working on second order reasoning in the context of the CoWriter project [5]. In the CoWriter project, the child’s teaches a Nao robot how to write. We use the learning by teaching paradigm to enhance motivation and engagement. In a collaborative learning task between a robot and a child, the idea is to model the child’s understanding and the child’s believes of the understanding of the co-learner robot. This way the robot could detect misunderstandings in view to correct them; or the robot could even create misunderstandings to enhance learning (by fostering questioning). Since my arrival on the CoWriter project, we initiated a project on diagnosis of dysgraphia using data collected via a graphic tablet (Wacom). Our first results using RNN are very promising (a patent and a journal paper have been submitted). This work will later on be integrated in the CoWriter handwriting activities to adapt the learning path according to the diagnosis and the learner’s handwriting difficulties.

A cognitive and affective architecture for social human-robot interaction